Below are the top books I’ve read in 2020. This year, there seems to be no particular theme; however, each of the three books below are rather short and readable. The History of Phlogiston Theory aims to dispel myths about phlogiston theory and provide a brief history of chemistry in the 18th century as the field moved from alchemy to quantitative methods. The Abraham Dilemma develops a theory of delusion as a mental disorder, with a focus to the peculiar complications of religious delusion, informed by the experiences of clinicians and patients. Finally, Libra Shrugged dives into Facebook’s (currently unsuccessful) attempt to launch a cryptocurrency at a worldwide scale.

As a bonus COVID Pandemic honorable mention, consider taking a look at Patterns of the Universe by Alex Bellos and Edmund Harriss for a welcoming distraction. This is a coloring book focused on mathematically interesting patterns - think fractals, geometric series, and so forth - with suggested coloring rules such as starting in the center of a pattern and randomly moving to and coloring an adjacent region by rolling a die. These may even light the spark of a budding recreational mathematician by thinking, for instance, about how long it would take on average to color the full picture following the prescribed randomized rules.

The History of Phlogiston Theory

If you’ve read a bit in philosophy of science, then you likely come across phlogiston theory, an early theory of combustion that was popular roughly during the 18th century. Phlogiston has long been used as a textbook example of theory change where good science replaces bad science. The idea of phlogiston is that it is something contained in a body that enables combustion and is released upon combustion. The typical story is that Phlogiston was overthrown by Lavoisier’s oxygen theory, since the former lacked the explanatory power of the latter and implied that phlogiston as a substance had levity or negative weight, an apparent absurdity; however, the theory is redeemed by being an important stepping stone to modern chemistry.

J. H. White’s short volume The History of Phlogiston Theory argues against the typical story. On account of the levity objection, White notes that Georg Stahl and his students regarded phlogiston as a principle that was imperceptible to the senses rather than a physical substance. Much like we think of energy today, phlogiston is never destroyed; rather, it is transferred during chemical reactions. For instance, metal contains phlogiston but loses it upon calcination, thus explaining the incombustibility of calx or oxide. Stahl integrated phlogiston into a larger theory which held, for instance, that phlogiston is the basis of color. It is not until with later proponents of the theory such as Johann Juncker that we see phlogiston treated as a substance.

As for Phlogiston’s role in the progression of chemical theory, White regards the Phlogiston period as “a halfway stage between alchemy and modern chemistry.” While Chemistry made leaps in progress during the 18th century - moving from alchemical pursuits in search of the philosophers’ stone to forming testable hypotheses about chemical reactions - “the advance was certainly not due to the Phlogiston Theory. Rather it may be said that chemistry advanced in spite of it, and Phlogiston was another such obstacle as the Aristotelian doctrine which had to be swept aside in the triumphant march toward truth.”

The downfall of Phlogiston - and why it’s worth studying - is that the theory’s unobservables did too much that wasn’t explainable. But this didn’t end with Phlogiston:

“The nature of flame remained unexplained, and to deal with the question of heat, Lavoisier had to introduce his hypothetical imponderable caloric with properties as strange and, one might almost say, as ridiculous as the phlogiston which he so contemptuously condemned. In many respects “caloric” was really “phlogiston” reappearing, much curtailed and humbled in scope it is true, under another name.”

As with phlogiston and caloric, it’s worth considering what’s doing the heavy lifting when we are developing new theory or examining foundational issues in existing theory.

The Abraham Dilemma: A Divine Delusion 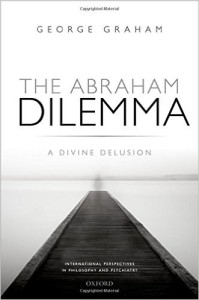 Many definitions of delusion hold that the subject of a delusion harbors false beliefs against evidence to the contrary. In the case of religious or spiritual delusion, however, this is complicated since not all such beliefs are verifiable or falsifiable, e.g. consider the proposition God exists. For sure, delusion still requires one to unreasonably hold a belief. What’s not clear, though, is whether or not this is sufficient. Consider an example of so-called Positive Illusions, beliefs that may be false that are beneficial to one’s well being, such as a parent believing that their child is not using drugs. On this account, delusion requires a belief held unreasonably with negative consequences for one’s well being.

Graham offers joint sufficiency conditions for delusion as well as suggesting which of them might be necessary. In addition to the two mentioned above, Graham includes resistance to challenges of one’s beliefs as well as over-identifying one’s self with one’s beliefs. While these conditions are not precise enough to act as diagnostic criteria, they do encapsulate a theory of delusion as a mental disorder that keeps clinicians and patients in mind. One criticism of the book is that Graham waits until near the end to unveil these sufficiency conditions, after much buildup, and then quickly moves on, leaving the reader a bit deflated.

I took George Graham’s seminar on Philosophy and Mental Illness in 2014 at Georgia State University and had several interesting chats about the metaphysics and definability of mental disorders.

Libra Shrugged: How Facebook Tried to Take Over the Money

Libra Shrugged tells the story of Libra, Facebook’s beleaguered attempt to create a cryptocurrency. In contrast to the discussion and poking fun at the cypherpunk ideology behind Bitcoin and other cyptocurrencies in Attack of the 50 Foot Blockchain, Libra Shrugged offers a beat-by-beat chronicle from the inception of Libra to Facebook’s prolonged battle with regulators with a bit of context sprinkled throughout.

The idea behind Libra was to create a cryptocurrency that is backed by a basket of stable circulating currencies, e.g. USD, Euro, etc., which would become the payment backend for Facebook’s platforms. At least, this is how Libra was presented early on. So many questions come to mind: How exactly does it work? Is it decentralized? If so, what’s the consensus algorithm? If not, why is it a cryptocurrency? Not only was Facebook was not forthcoming on the details (especially to financial regulators, especially regarding data privacy), but they seemed unsure of the details when they did offer answers.

Aside from the Facebook shenanigans that we’ve come to expect, Gerard offers a devastating (and humorous) critique the mind-set that spawned Libra. Here’s a taste:

“A lot of the problems that Facebook claims Libra solves are really just US retail banking being a few decades behind the rest of the world—sending money between banks can take days, everything has fees, so many things need a phone call, paper checks are still a thing, and so on. But it’s standard in Silicon Valley to propose an all-encompassing international system, and base it entirely on looking out your window in Palo Alto.”

Libra Shrugged provides an amusing and enjoyable (at times frustrating) case study of the pitfalls of both new technology exuberance and how bad branding (being Facebook’s cryptocurrency) can poison an already suspect project.

Fittingly, at the time of writing this, Libra and the Libra Association have rebranded to Diem.